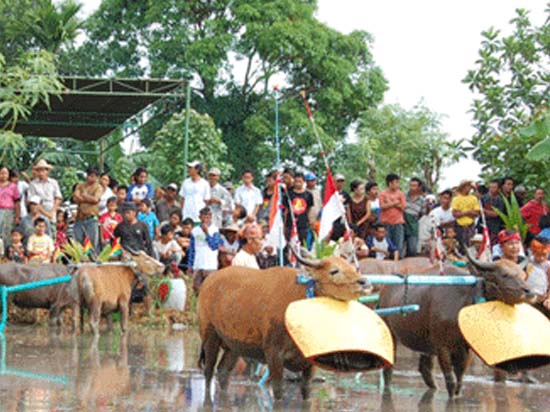 In this festival is especially for the ability control of two cattle completed with farmer equipment such Gau, Ayuga, Samet and Serumpungan or Kerotok. Before the race begins, the cattle that have been chosen by the owners with care. The cow is decorated to make it more interesting in the race. There is a procession of locals accompanied by music and fanfare. Some of the popular genres of music that accompany this procession are Tawak-Tawak, Gamelan Kampul and Batek Baris Lingsar. After all this, the race begins in the arena. The main arena comprises of a 100 meter long race track. However, it is not an ordinary race track, it is waterlogged. The cows that have been prepared for the race, with good food, grooming and a tiny dose of ‘black magic’ then take to the tracks. The winner and the good performers in the race get star ratings and are put up for sale by the owners as they are considered to be a good investment.