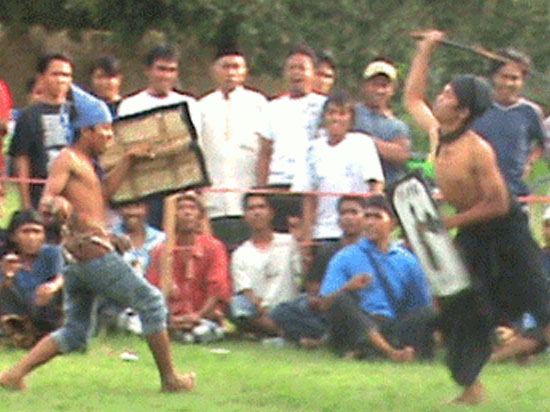 Presean is an extreme fight game as the symbol of masculinity of Sasaknes man in Lombok. This game is  battle of two men armed with rattan sticks in Sasak language called Penjalin and armored buffalo skin thick and hard called Ende. Two men fighters armed with "Penjalin" attack to each other, defending their opponent's blows with Ende. The fighters in local Lombok language "Sasak" called Pepadu, they are come from selected brave and gentle man who just  wearing 'Sarung" and headband without any clothes or other body and face protectors. There is "Pakembar" as the referee of the game. 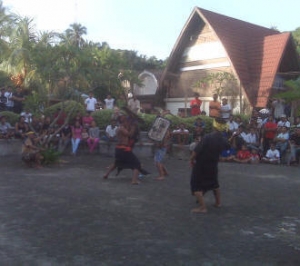 The Presean cultural  is already known from Lombok Sasak society for generations, originally a part  traditional ceremony of the happiness of soldiers in Lombok Kingdom when they get won in a war and a ritual ceremony to invoke the rain as drought. As well as its historic associatPresean (stick fighting) in Lombokions, the fight also serves to ask God for rain for the imminent planting season with the ancient belief being that the more blood spilled, the more rain would follow. Presean fighting now it’s become part of tradition and entertainment culture performance in Lombok

The game performance with Lombok traditional music called "Beleganjur" and a commentator giving spirit to the fighters. Uniquely from Presean fight, the participants or Pepadu had never been specially prepared. Duel two pepadu held in five rounds, the winner is determined by the results obtained value or one of pepadu leaky head, referee will stop the game if the fighter get blood even they still strong enough to fight. Pakembar (referee) even request visitors or audience to participate toying with rattan sticks and shields provided. The audience / prospective participants can propose themselves or be selected by the referee edge and fight with other visitor or those selected fighters. All consequences caused in the game is on own risk of fighter even though there is very simple emergency medical treatment.
The winner awarded with packed of cigarette, body soap and shampoo  or an envelope  with small amount of money. There is no big reward actually for the winner but young man who like this game to express their spirit also as a manifest of love to Lombok culture.

Regulation Presean fighting is very simple, fighter (pepadu) should not be hitting the bottom of his opponent's stomach (thigh, leg, let alone the groin. The highest value is obtained if fighter (pepadu) successful embezzlement until down. Interestingly, on the sidelines of the battle of the pepadu plus the referees have to dance when traditional music plays. Maybe its intention to release the tension during the game. It such a lovely attraction, while the fighters scuffled with each other, a few seconds later they were dancing, laughing and looking for crack versus weakness, a second later hit hard rattan shields - plaques!, then they dance again
The match end with greetings and hugs of friendship between the fighters. No sign of resentment and all just a game! It's really casual.
The scenery of Presean culture a lot perform for celebration of Indonesia Independent day in Lombok, a week before and after independent day of Indonesia (August 17) and also on other cultural event such as Bulan Apresiasi Budaya (BAB) as government program to Introduce of Lombok culture in general tourist society and one week perform on Senggigi Festival in July.